The Chinese and the Russians

The Chinese spent a mere $43 billion dollars to put a big happy face on their image at the Olympic games. Of course, there is something slightly obscene in spending that kind of money when many of your citizens live in abject poverty and the victims of the recent earthquake still suffer in the streets. (Editor’s note: $15 billion was spent by Greece on the Athens Olympics in 2004, and thousands of Chinese people were moved out of their homes to make way for the new state-of-the art stadiums.) The opening ceremonies were nothing short of spectacular and specifically designed to not only impress, but to give us a warm fuzzy feeling about the Chicoms. No one could disagree… amazing.

Once the euphoria of the ceremony had worn off, some irritating realities began to emerge.

· The draconian smog abatement program had not worked, a fact made clear to the world as the TV pictures of the early road cycling events traversed the globe.

· It turns out the darling little girl sweetly singing the song at the Olympic ceremony (I think it was entitled, “Workers Rise Up and Beat the Shit Out of the Capitalist Pigs”) was not actually singing the song. The girl doing the singing had been deemed not cute enough by the Chinese image-makers, so while her voice carried to the World, the cute one lip-synced the words. A unique Olympic Milli Vanilli moment.

· We also learned that to assure that the fireworks display went off perfectly, the broadcast images had been “digitally enhanced”.
· Journalists discovered that the remote parks specifically set aside to allow protesters to voice their objections remained curiously devoid of protesters… or anyone for that matter. Chinese officials calmly admitted that one required a permit to protest in the parks and that, regrettably, no permits had been issued. Well, that was neatly handled.
· We learned that despite public announcements, all the seats for the events were not sold. The Chinese brought in warm bodies off the streets to fill those empty seats.

· The gymnasts were spectacular, especially the tiny Chinese girls who flipped, twisted and tumbled with extraordinary ease. We later learned that these young girls had shown promise at age three and had been spirited away from their families to spend their childhood in gymnastics training camps. Some questions were also raised about their age since by Olympic rules the girls must be 16 years of age to compete. All of the sprites had the physical development of my 9 year-old grand daughter, but the Chinese assured us that the government issued passports for the girls all confirmed their legal status. Right. Looking at the US team and the Chinese girls side by side…. Well, the US girls had breasts, hips and the look one would expect from a mid to late teen young woman. The Chinese girls looked like 9 or 10 year olds. I thought back to the bad old days of the Cold War when the Romanian and Bulgarian gymnastic teams gave drugs to their teen women to prevent the onset of puberty. Had the Chicoms taken Vince Lombardi’s dictum to heart? (“Winning isn’t the most important thing, it’s the ONLY thing.”)

While the world’s attention focused on the exploits of Mike Phelps and the “Redeem Team” and with President Bush in the stands as First Fan, Russia decided this would be an excellent time to invade Georgia. Bush in the early days of his administration had badly misjudged Putin, declaring that ‘I have looked into his heart and see a man that I can deal with…’ or something like that). He should have looked into his eyes instead. Any businessman worth his salt would have gazed into those rattlesnake eyes and quickly concluded that they would trust this guy no further than they could throw a fully-loaded 737.

During Bush’s two terms Putin has consolidated the KGB control over Russia by boldly eliminating the private ownership of oil assets by jailing or evicting the executives of the companies and putting them under State control. He has also callously jailed offending journalists, executing an enemy in London by adding a dollop of plutonium to his won-ton soup and rigging an election to put his hand picked puppet, Medeved, in the President’s slot. Russian democracy my ass. Russia is now the World’s number two exporter of oil and they covet the oil pipeline that runs through Georgia. With that asset in hand they have a complete strangle hold on the entire region and can bring Europe to heel.

Candidate Obama, from his vacation headquarters in Hawaii, immediately called for the intervention of the UN. That should give anyone paying attention an indication of the depth of his foreign policy knowledge. The UN has been powerless and less than ineffective in stopping genocide or international crisis for decades. Think Rwanda, Darfur, the Sudan or the Iraqi Oil for Food scandal for that matter. He also missed that Russia holds a seat on the Security Council and an unconditional veto. The enemies of the US are licking their chops at the prospect of having this naive reincarnation of Jimmy Carter sitting in the White House.

Meanwhile, the Democrats in Congress continue to plug their heads in the sand ostrich-style and ignore the realities of the strategic importance of the oil crisis. The newly-aggressive Russians and the less than friendly countries of the Middle East have the US in an extremely vulnerable position. With 70% of the US’s oil needs coming from foreign sources, they hold a gun to the head of the North American economy. And despite the optimism of T. Boone and others that alternative energy sources and conservation (inflate those tires folks!) is the ultimate answer, that nirvana is unlikely to arrive for at least a decade. Not drilling for domestic oil and fast-tracking nuclear power plants represents the most dangerous form of economic brinksmanship. 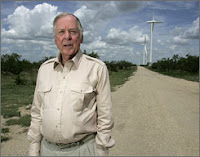 Speaking of T. Boone… I suggested in a recent piece (“This an’ That”, August 6) that someone should look into the possible economic benefit ol’ T-bone might have from his expensive ad campaign touting wind farms and natural gas. Voila! On cue author and journalist Michelle Malkin did just that in a piece entitled “Nan and the Big Wind Boondoggle”, August 13). Turns out, Pickens is the founder and principal stockholder of a company called Clean Energy Fuels Corporation (stock symbol CLNE) that is heavily into natural gas. He also founded a company called Mesa Power that (surprise, surprise) builds wind farms. Mesa has invested some $12 billion in a wind farm development in the Texas Panhandle. T-bone admits that these wind farms cannot be economically viable without government subsidies, so it should stun no one that he enthusiastically supports a bill in California to provide $10 billion in state and federal funds for renewal energy resources. Think wind and natural gas.
A liberal friend of mine frequently suggests that we should “follow the money” to ferret out the motives of our politicians. Yeah, let’s. Nancy Pelosi is a strong supporter of Mr. Pickens’s suggestions, often quoting his “We can’t drill our way out of this problem”. Does Nancy have a personal interest in this issue? Well, yes. She disclosed on her required financial forms that she had made up to $250,000 from her investment in Clean Energy Fuels Corp last year. She had been granted the right to purchase at the IPO $100,000 of CLNE stock.

If you’ve ever wondered how member of Congress can all retire as millionaires when they make a salary of $169,300, the IPO scam is the answer. It’s way better than taking the payoffs in cash and then hiding it in the freezer. In return for future favors Congressmen are invited to purchase blocks of companies about to go public and dump them right after the opening when the prices typically rise. Instant profit. Tom Foley of Washington, former Speaker of the House, over did this perk and it cost him his seat. Obviously, with a myopic press this quasi-legal method of lining the pockets of US politicians continues.

Don’t expect to see this cozy arrangement between T. Boone Pickens and Nancy Pelosi revealed anytime soon on the NBC Nightly News or the pages of the New York Times. Maybe the National Enquirer will get on the case. They were the only guys who picked up that John Edwards was screwing around on his cancer stricken wife and paying the mistress with campaign funds.

I guess I am just old fashioned in believing that responsible journalists would report the conflict of interest obvious in Pickens’s campaign and Pelosi’s clear involvement. Not likely. On the other hand, “USA Today” just layed off 3,000 people. Maybe, the public is catching on to the liberal bias in the mainstream media.

One Response to The Chinese and the Russians