A new speech affectation has replaced the “Valley Girl Lift”; raising the voice inflection, usually at the end of sentences. This also added the annoyance of making every sentence sound like a question.

The new one is called “vocal fry”, a creaky voice guttural vibration. Science magazine calls it “glottalization” and others call it “laryngealization”. I think I’ll stick with vocal fry. Until I discovered the official name for this affectation I called it “the strangled voice”.  Apparently, this manner of talking is accomplished by constricting the vocal cords to such a degree that the sound comes out at the bottom end of the vocal register.

So why do so many young women affect this maddening manner of speech? Lots of theories, but who the hell knows? Why do styles and fads come and just as quickly burn out? Some theorize it’s a kind of tribalism thing between women. Others believe that making the voice deeper creates the impression of authority and competence.

One study estimates that fully two-thirds of US women are now using this method of talking and Bob Garfield believes it is particularly annoying to older white men. Being an older, white male I can attest to that belief. It drives me crazy.

Olga Kazen in an article in Atlantic magazine reports that studies at Duke University conclude that this manner of speech may actually hurt job prospects for young women. That’s not good, but certainly better than earlier reports that vocal fry would do permanent damage to vocal cords. Subsequent research has shown that to be untrue.

Some NFL players continue to kneel during the National Anthem despite the ongoing deterioration of attendance at games and viewers on TV. LA Raiders running back Marshawn Lynch doubled the disrespect at a game played in Mexico. He knelt for the US anthem and then stood for the Mexican anthem. Having observed this asshole in Seattle for number of years, I was not surprised. Now the rest of the country knows what a jerk he is. 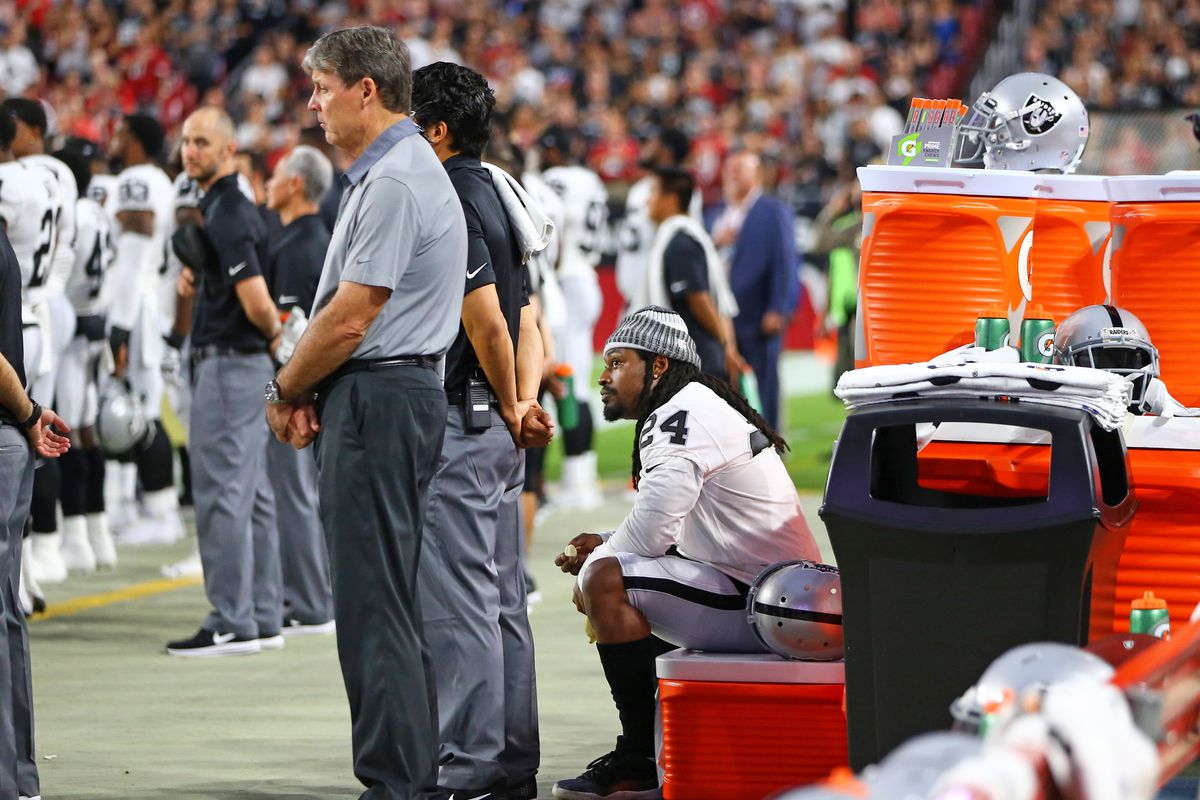 The owners of these teams are understandably concerned about empty seats, reduced revenue from sales of team gear, and diminishing TV viewership. They are considering keeping the players in the locker room until the anthem is over. I seriously doubt that’s going to fool anyone. The TV networks have found a way not to show the protests and the fans in the stands booing the kneeling players: they all have decided not to broadcast the singing of the national anthem. I guess they figure if viewers don’t see it, then they will forget about it. Maybe that will work. I think the viewers will see through that ploy. Viewer-ship has continued to decline.

Frankly, I think the owners could have nipped this problem in the bud by simply telling the players who got this kneeling thing going, “Look, you are pissing people off. If you do it again you will be sent to the locker room and you will not get paid for that game.” Of course, if enough players did it the team would probably lose the game and piss off the fans. These guys are paid a lot per game. Missing a check would hurt.

In midst of this bungled customer relations nightmare comes the debate over Roger Goodell’s contract. Roger the Dodger is, as all football fans know, the Commissioner of the NFL. He’s got a good gig going already. He made $31.7 million in 2015 and now he wants a new contract for $49.5 million/year, lifetime use of a private jet and lifetime health insurance for his family. True, under his tenure the NFL grew dramatically and the value of those franchises increased handsomely. Now with attendance and viewership declining alarmingly, ardor over Goodell might be cooling. Roger’s handling of the many domestic abuse issues with players, and his fumbling of the ball on this protest stuff may suggest some new blood might be in order. Someone with balls. How about Condoleezza Rice? She always wanted the job.

Much to my surprise the Republicans managed to get together and pass a tax cut plan. The Democrats, completely committed to their “resist” strategy, began to howl like scalded cats. Pelosi, as usual, was way over the top calling the plan “Armageddon”. Really? Cutting taxes is going to end the world as we know it?

The Democrats rely heavily on the ignorance of the American voter. Schools don’t teach history or even basic economics anymore so the Dems confidently spew their misinformation in the hopes that the ignorant and the hyper-partisans will buy their bullshit. They blissfully pretend they don’t know what happened under the Reagan and GW Bush tax cuts. Jack Kemp (the Congressman from our home district outside of Buffalo) was the godfather of the Reagan tax strategy that brought about the great economic expansion of the 80s. But, say the liberals, “The tax cuts increased the deficit!” No, actually. As Thomas Sowell, the famous Stanford economist explains in his book, “The Vision of the Anointed,” the tax cuts greatly increased government revenues, but the Democrat controlled congress at that time, and they spent all that increase plus a lot more. I think the Trump White House (if they can maintain control of congress) plans to control spending and use the increased revenues for infrastructure, to rebuild the military and to reduce the deficit.

The Democrats standard howls of tax cuts for the rich and nothing for the middle class were momentarily muted when AT&T and Comcast immediately announced they would give every employee a $1,000 bonus. Together just those two companies employ 350,000 workers.  I suspect those folks will be very happy with an extra thousand bucks at Christmas time. A number of other companies also announced plans to expand, build new factories or otherwise improve things for workers. These announcements refuted the Dems claims even as they left their mouths.

The Democrats are betting the farm, their house and their first-born child on retaking control of congress on the November 2018. Their pipe dream of undoing the last election by drumming Trump from office via the Mueller investigation seems to be evaporating. First it was “collusion” with the Russians to steal the election. Then it became “obstruction of justice” until even Rachel Maddow couldn’t figure out a way to hang that one on Trump. Now, it has shifted to “sexual harassment” which has been weaponized to include everything from boorish behavior to rape and to attack opponents. Not that there have not been many men who crossed the line and taken advantage of their employees or junior associates. In Trump’s case the assertions are purely politically motivated and I doubt they are going anywhere.

In the deeply divided country, turn-out is everything and the Democrats are really motivated. There is nothing more dangerous than a cornered wild animal and if the Republicans do not do a better job of selling their accomplishments they could well get their asses handed to them next November.

One Response to Random Stuff