I could never figure out why the Navy refused to pay us for the three hazard duties for which we qualified. It was also never clear why they excluded diving, the most dangerous of the lot, especially when swimming pure oxygen re-breathers in the middle of the night in the open ocean. Apparently the bean counters had never heard of the crappy Emerson re-breather rigs we often swam that frequently leaked and caused guys to pass out. (The German made Draegers were far superior but we couldn’t buy new ones and had to cannibalize parts to keep them running.)
They paid us for working with explosives (they didn’t call it underwater demolition for grins) and for parachuting. The former pay started right after Hell Week when we began playing with these fun toys on the beach at Little Creek. Hazard pay for parachuting came after we got back from Army jump school. They paid us $110 per month hazard pay for each and that came within $2.88 of doubling my meager Ensign base pay. The enlisted guys only got $55/mo. for each. Never understood that either. The only stipulation was that we had to work with explosives and make one parachute jump each month. We could always find a way to get the explosive business taken care of, but when we were deployed at sea getting an aircraft to make the parachute jump presented problems. These usually hastily arranged and down to the wire parachute drops we called “pay jumps”.
When we pulled into Toulon, France in the summer of 1966 aboard the USS Casa Grande our platoon was in serious need of a pay jump. Our Platoon CO, Pablo Zimmerman, one of the finest finaglers I have ever known, somehow convinced a Navy CH-46 supply helicopter to devote a morning to a parachute drop. Some sketchy arrangements were negotiated for us to jump into a grass strip auxiliary airfield near Toulon.

We all grabbed our parachutes and gear and crammed into the chopper for the short hop to the field where some confused discussion took place between Pierre Ponson, the only guy in the platoon who spoke fluent French, and some French military guys. Nobody knew what was discussed but the winds were light and the time tight so we cut that confab short and boarded the chopper.

The normal procedure for these jumps is to pop some colored smoke on the ground to show the wind direction. The smoke showed light winds blowing from east to west at maybe 6 knots. Pas de problem. The next step would be to drop a streamer, a long ribbon with a light weight to see where that went so that adjustments could be made for the exit point. They lost sight of the streamer and decided to go directly to the next step since time, as I said, was tight. The next step involved jumping one guy out of the aircraft to see where he lands so that further adjustments can be made for the rest of the jumpers. This guy, for obvious reasons, is called the “wind dummy” and by custom falls to the lowest ranking or most expendable member of the Team…. in this case, me. Since I was the APO (Assistant Platoon Officer) I was not the lowest ranking. However, I rang the bell as the most expendable. (It must also be said that this was something of a tradition in Third Platoon.)

Pierre held the position of jumpmaster for our platoon and had little experience. The joke around the Teams was that if Pierre had the job of JM for the day that you should make sure you had some change in your pocket. The theory being: you would likely land so far from the drop zone you would need to call someone to give you a ride back. Pierre went on to spend 30 years in the Teams and become the head of the parachute program. Great guy.

The CH-46 had a gate that dropped down from the upward sloping tail creating a nice flat platform like a wide diving board. Standing on the edge of the thing with my hand braced against the overhead, I had a 270-degree view of the forest and airfield 3000 feet below. Kind of a weird feeling. Pierre slapped me on the ass and I launched myself into space.

When you jump out of an airplane, especially a military aircraft, you generally have over 100 knots of forward speed to assist in opening the parachute. Not so when you jump out the back door of a chopper. You plummet like a dropped rock off a tall building and you get a few extra seconds of that stomach clenching feeling of acceleration before the chute finally opens. My parachute popped open with a gratifying jolt to my harness and I swung gently beneath that beautiful green canopy as I looked around to orient myself. 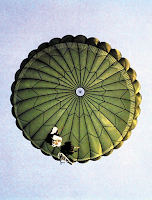 We had recently been outfitted with the new T-10M (M for maneuverable) parachutes. They had an oval cut out of the back of the canopy through which air spilled, giving you about 5 knots of forward speed. Pulling down on one set of risers distorted the opening and turned the canopy in that direction. Thus, you could steer the thing and when landing, head into the wind and reduce the backward speed by the 5 knots. Of course, if you landed downwind you added 5 knots to the wind speed and could create some bone crunching collisions with Mother Earth.

I quickly discovered that the winds aloft were running at 90 degrees different from the smoke on the ground. It was also quite clear that they were blowing some 45 knots faster. Even facing the wind my measly 5 knots now had me drifting backwards at 40. Looking down between my feet I could see that I had already left the airfield far behind and now raced over dense forest with very large trees. I looked down to see if I still had my survival knife strapped to my leg. Yep, still there. Then I thought that cutting yourself loose while hanging in a 100 ft tree may not be the wisest solution to what looked like an inevitable “tree jump”, and one a couple of miles from the drop zone at that. 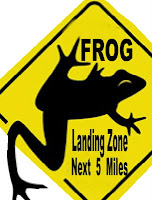 When I got down to about 750 feet the wind suddenly abated and I had control of the parachute again. I started looking around for a small tree to land in and spotted a clearing with scattered small trees. Great! I turned and headed for the clearing. I then spotted two soldiers in full combat gear with automatic weapons running toward my clearing. “Hmmm?” I wondered if these guys, who were clearly not US troops, had gotten the word that we were making a friendly little pay jump here. Then I thought maybe I’d drifted far enough to be in some secret installation. No time to think that through, I was landing regardless.
I turned the parachute into the wind for the landing at about 100 feet and the two troopers stopped, raised their automatic weapons and opened fire on full auto. My first thought was “Shit, I’m dead.” My second thought just before I piled into the ground was, “How did they miss me?” As my chute collapsed over a tree about 12 feet tall the two soldiers approached with their weapons aimed at me menacingly. Since I was a bit alarmed (just a bit) I had forgotten the few French phrases I knew. Asking for a beer or a cup of coffee probably would not have been appropriate. Come to think of it, asking where the toilet was would have fit the picture perfectly. (Let the record show I did NOT piss my pants.) I had my hands up. No Hollywood Steven Segal shit of going for my 4” survival knife with two heavily armed dudes standing 10 feet away. I pointed to my US Navy insignia and said, “US Navy. Friends. NATO. And, irrationally, “pay jump”.
They started laughing and jabbering in French. One of the guys walked over, opened the breech of his rifle showing me he had been firing blanks. Well, that explained how they missed me. They helped me pull my chute down from the tree and as I stuffed it into my parachute bag I heard more auto weapons fire. Three more of our guys landed near me with the same reception. Obviously, Pierre did not learn anything from his wind dummy’s trip into the enchanted forest. As I imagined various forms of torture for Pierre and considered the long walk thru the woods to the drop zone, one of the soldiers decided to help out by handing me my reserve chute. Regrettably, he picked it up by the rip cord handle instead of the carry handle and the spring loaded reserve exploded all over the grass. He stood there staring at the ripcord and said, “Voila!” Indeed.
I managed to stuff the deployed reserve in the bag with my main chute and started the long walk back to the drop zone. The teammates that had joined me on the march and I had plenty of time to plan some diabolical payback for Pierre.