I can hear you saying, “Oh no, not another blog post on global warming!!” This is a piece about fish, something I know more than a little about. I majored in marine biology and ichthyology with courses in oceanography, marine ecology and nearly any science course you could imagine. Furthermore, I still study the fisheries issue.

So, you might conclude that when the “Province” newspaper came out with another junk science piece claiming this time that global warming is killing off fish stocks due to a warming ocean, I got a bit unglued.

Associate Professor William Cheung of the Institute of Oceans and Fisheries at UBC said his theory of preventing the collapse of fish stocks depended on everyone abiding by The Paris Agreement on climate change and thereby restrict the rise in air temperatures to 1.5 degrees C. Doing nothing, he said, would cause them to increase to 3 degrees C. Going to 3 degrees would warm the water and reduce fish catches by 40%, they concluded.

Let me ask you….. when you are going to heat up water for a cup of tea do you put the flame above the water or below? How long would it take to heat up the water with a temperature 3 degrees warmer than the room above the pan? I have no idea either but surely a long time. Associate Professor Cheung has a BS in biology and a masters degree in philosophy and apparently he’s going for his doctorate in that field. He works for the World Wildlife Fund. Doesn’t sound like he knows much about fisheries and the WWF is a notorious left wing, radical AGW outfit.

I grant you there are always, it seems, competing theories espoused by scientists in the area of climate science and we tend to believe the ones that reinforce our prejudices. In the case of warming oceans, I am inclined to believe the study sponsored by the Scripps Institute’s Argo program that has 3500 free drifting buoys all over the world. These buoys sample the temperature of the water every ten days and send it up to a satellite.  They have compared this accumulated data with that collected during the voyage of the HMS Challenger (1872-1876) and concluded that ocean temperatures have risen .33 degrees C since 1876. Most of that rise occurred during the first 50 years after 1876. It would seem that rising ocean temperatures are not a worrisome problem.

Ass. Professor Cheung’s contention that fish stocks have been declining because of rising water temperatures is merely an attempt to demonize Trump for threatening to pull out of the Paris Agreement. Man has been destroying fish stocks beginning in Roman times and over the course of our history. The list of species wiped out or nearly so is sobering. I won’t chronicle the entire butchers bill but will discuss a couple in detail. If this history of greed and stupidity interests you, pick up Callum Roberts book, “The Unnatural History of the Sea”.

The Romans developed a taste for the eggs and flesh of the mighty sturgeon and they spawn in rivers where they are relatively easy to catch. It was common to catch these monsters weighing 475 Kg and they had to be hauled out of the water with a team of oxen. Like many other species that have been driven to extinction or nearly so, when a species begins to be exploited, the larger fish are taken first and the average size of the fish caught falls. The collapse of the fishery begins when the size/age drops below the age where they become mature and can spawn. For example, the slow growing sturgeon does not spawn until they are 20 years old. This is precisely what happened to the Atlantic cod. More on that debacle later.

Russians developed a taste for caviar. Overfishing eventually led to a ban on the fishery in the Caspian Sea.

In Medieval Times, Europeans caught species that returned to the rivers to spawn such as salmon, whitefish, shad, eels and sturgeon using weirs, nets, spears, and hook and line.  At the time, forests were being cleared for crops and little attention paid to erosion. Soil washed into the rivers and streams destroying spawning grounds and smothering eggs. Dams also prevented migrating fish from reaching their spawning grounds. Populations plummeted. Atlantic salmon were prized and were soon nearly destroyed in the European countries. 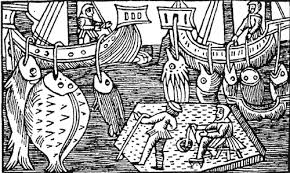 The Scandinavians discovered cod in the 11th century and found they could dry the huge fish that ran to 3 to 4 lbs. A trade in these dried cod flourished throughout Europe and soon became a target species for European fishermen. The results were predictable and soon their numbers and size shrank. The European fisherman using drift nets began pursuing other species and saw those numbers decline as well. The advent of trawlers, the dragging of heavy metal weighted nets over the bottom, soon finished the job on the eastern side of the Atlantic. Trawlers killed everything as they plowed the ocean floor, not only the fish they were seeking, but all manner of bottom life with the result that all species were swept up and the habitat was also destroyed.

The New World opened new fishing grounds. When the first white explorers came to North America they discovered an abundance in the sea that astounded them. Huge shoals of cod as long as your leg were so thick in number, you could not thrust a spear into the water without coming up with one. The rivers were choked with Atlantic salmon. Every manner of fish species and oysters clogged the shallow waters. Like the buffalo, passenger pigeon and the huge trees the early settlers could not imagine ever wiping them out. Then the European and Russian trawlers showed up in their steam trawlers and with the advent of freezers proceeded to decimate the cod, halibut and haddock.  Then came the pollack, red fish and flounder. The scallop trawlers were even more destructive to the sea floor.

Extending the EEZ or “territorial limit” out to 200 nautical miles did help in keeping the foreign trawlers out but they were soon replaced by domestic trawlers that continued the over-fishing. The cod population collapsed. In a desperate attempt to save the cod fishery in 1992 the Canadian government put a two year ban of cod fishing and 40,000 people were out of work. That ban has been extended as the cod fishery struggles to recover.

The same sad story unfolded when men started settling in the Pacific Northwest. They found unimaginable riches in lumber, gold, furs and fish. The runs of salmon were massive and seemingly inexhaustible. All manner of fish in incredible numbers inhabited the sea. Salmon were especially important to the native tribes that inhabited this vast land.

The various species of salmonids of the Oncorhynchus genus had been around since the Miocene period some 6 million years ago. They had survived the birth of mountains, glaciation and floods and seen cataclysmic climate change and continued to survive and thrive.

That is until the white man arrived and started killing them all and destroying their rivers. This history and the destruction is carefully documented in a book from a fisheries biologist from the University of Oregon, Jim Lichatowich called, “Salmon Without Rivers.” The usual suspects in habitat destruction were in play from logging, to mining to dam building. As the salmon runs started to decline, wrong-headed stocking programs were attempted and failed miserably. Of course, foreign fishing boats… factory ships…. continue to over-fish these amazingly resilient fish far at sea.

Warm water fish like groupers and sea bass have also been over-fished to dangerous levels. Sword fish and blue fin tuna are being fished to endangerment levels. The giant bluefin can weigh in at 400 kg and fetch as much as $100,000 at auction in Tokyo.  These fish are so valuable that they’re now using satellites to track these giant ocean wanderers. Soon these magnificent fish will be no more. 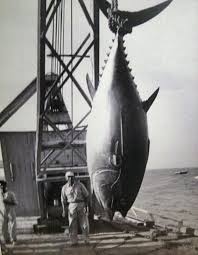 So, what’s to be done about the elimination of one species after another? Eventually the problem takes care of itself. When all the fish are gone, it’s no longer practical to send fishing fleets thousands of miles. International agreements would help. It worked for whales. Perhaps limiting the killing of bluefin tuna could work, but I doubt you could change the taste of Japanese diners so the demand would remain. The Japanese have paid little attention to the ban on whale hunting.

One thing that might help is to ban trawling as a method of fishing. It not only kills everything in its path, but also destroys the habitat. Professor Roberts has sponsored the establishment of vast marine reserves where no fishing is allowed. This has shown great promise in allowing marine life to flourish and grow unmolested, and eventually repopulate surrounding seas.

Clearly, Cheung’s theory that a minor uptick in temperature, even if it happens, is not going to impact fish populations. And, his contention that warm water species are going to move to the Arctic is pure fantasy and disconnected from fish behavior. This is not science, it’s pure BS.

One Response to Climate and Fish