The Everybody Gets a Trophy Generation

After the election of Donald Trump one opinion writer speculated that Trump’s election signaled the ‘end of political correctness’. Perhaps. But before that happens, the death throes will be protracted. This struggle will be led by the current generation of pampered, helicoptered, everybody-gets-a-trophy youth who have been sheltered from the real world and any smidgen of adversity.
Youthful Hillary Clinton supporters were seen on TV crying uncontrollably. Major universities had crying rooms complete with coloring books and Play-Doh to soothe students distraught over the election of Trump. My own alma mater, Cornell, had a “cry-in” where students could sit in a circle and cry together. When I was at Cornell, I would have had to cry in my dishwater where I washed pots for my food. One Yale professor made the midterm exam optional so that students depressed by the election results wouldn’t have to discommode themselves with one of the more troublesome aspects of university life.

The more visible expression of their dismay were the marches and riots in many of the big cities across the US and the complete meltdown of the left-leaning media. Any marches always bring out the anarchists who use any pretext to break windows and start fires. Tearful youths made up many of the marchers, but naturally were joined by their helicopter left-wing parents convinced that America was doomed. Many were “triggered” and felt “unsafe” now that Trump would be president. Really? Unsafe? What did they really think was going to happen? Did they believe Trump was going to send the police to break into their dorm rooms and confiscate their pot stash? 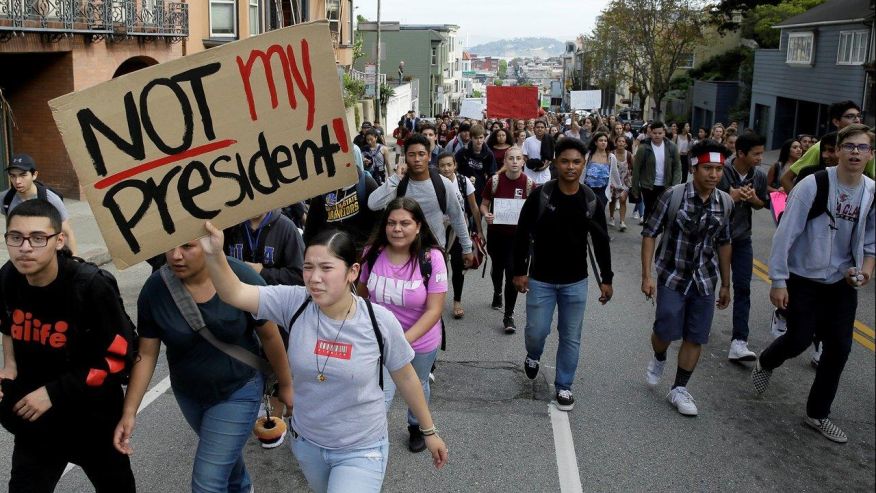 Reporters covering the protest marches started asking the young marchers if they had voted in the election. About half admitted they had not voted. Call me old-fashioned, but I figure if you did not bother to get off your butt and vote, you have no right to bitch about the outcome.

Speaking of triggered and unsafe…Thursday’s edition of “The National Post” featured an article by Christie Blatchford about a teacher at a posh BC private school who got fired for expressing an opinion on abortion. His class was a criminal law unit on “vice, ethics, morality and the law”. He was pointing out that in a pluralistic democracy there is often a difference between people’s personal morality and the law. Here is where he uttered the fateful opinion
that he personally disapproved of abortion but it was, in fact, the law. One of his female students was “triggered” by this comment and felt “unsafe”, refusing to return to class.

What the Hell is triggered anyway…stuffed like Roy Rogers’ horse Trigger? Physically assaulted by the horse? OK, that’s absurd. I will anxiously await some thoughtful reader explaining triggered to me.

The teacher found himself reprimanded by the school administrator and forced to make a humiliating public apology in front of students and fellow teachers. Ms. Blatchford likened this to Maoist China where public confessions for ideological sins were punished. The spoiled brat then rushed out of the room crying because she thought she was being singled out. That was it. They fired the guy.

I wonder if the school administrators and the parents felt really good about firing the poor guy right before Christmas for a politically incorrect comment? What the parents of this spoiled child should have done was confiscate her cell phone and car keys and saved the $30,000 tuition and made her go to public school. And made her apologize to the teacher for the consequences of her behavior. As far as the administrators of this school…they should be publicly humiliated.

These kids, the Everybody-Gets-a-Trophy Generation, will be our future leaders. Most of these youngsters have never had any adversity in their lives. How are they going to survive the setbacks that inevitably happen at some point? Like when they get fired, or one of their kids comes down with a terrible disease, or the arrogant young woman comes home early to find her husband in bed with her best friend. Shit happens in life and if you can’t even deal with encountering someone with a different opinion or belief without freaking out, how are you going to deal with some really serious stuff?

Our forefathers survived the adversity of the fear and death of the Spanish flu epidemic, the horrors of WWI, the depression years and the massive deaths of WWII. In the 40’s and 50’s most people lived on farms where hard work and sacrifice were common, where helping your neighbor was expected and political correctness incomprehensible. It is not surprising that those of us who lived those years find the behavior of these pampered teens and college
students ridiculous.

I have theorized that the survivors of SEAL training, regarded as the most difficult in the world, are usually the men who have had a history of adversity in their young lives. The training is the definition of adversity writ large. If you’re sensitive to verbal abuse, this is not the program for you. As the Instructors in BUDS like to say, “Second place is First Loser.”

3 Responses to The Everybody Gets a Trophy Generation