The Story Behind the Painting 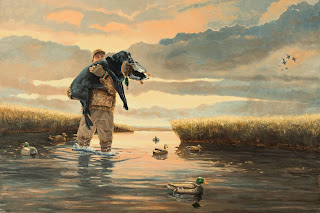 Note: I have received reminders from two of my three faithful readers that no new posts have been added to my blog in some time. True. Once again this year, we are hiding out in Hawaii escaping the gray and wet of the Pacific NW and for some reason when in Hawaii I find it difficult to sit down and write. I can’t even get enthusiastic about writing about the wrangling of the Democrats as they try to pass a health care bill nobody wants.

We learned last week that “The Conservator”, the quarterly magazine of Ducks Unlimited Canada, has published the painting “Sedge’s Last Retrieve” and my accompanying story. A few days later we learned that “The Retriever News”, a US based magazine aimed at sporting retrievers, will also publish the painting and story in their April edition. Hey, other than indignant letters to the editor, it’s the first thing (and likely the last) I ever had published. True, they paid me nothing and it’s pretty brief but…

The picture and the story as published below gives, you the gist of how it happened. What follows is the ‘rest of the story’.

The story behind the painting, “Sedge’s Last Retrieve” is one of sentiment. True, it’s been argued by art critics that sentimentality is to be avoided when painting. Nevertheless when the challenge arose to recreate a poignant moment experienced by two veteran waterfowlers, sentiment became the unavoidable subject. Dick Draper, British Columbian sportsman, retired entrepreneur, dog lover and former U.S. Navy SEAL, commissioned me to capture that moment for posterity. The following narrative, in his own words. 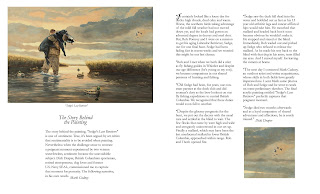 It certainly looked like a lousy day for ducks: high clouds, dead calm and warm. Worse, the northern birds taking advantage of the mild fall weather had not moved down yet, and the locals had gotten an advanced degree in decoys and steel shot. But Rob Pomroy and I were on a mission to get his aging Labrador Retriever, Sedge, out for one final hunt. Sedge had been fading fast in recent weeks and we worried this might be our last chance.

Rob and I met when we both did a stint as fly fishing guides in Whistler and despite our age difference (he’s as young as my son), we became companions in our shared passions of hunting and fishing.

Old Sedge had been for years, our constant partner at the duck club and did yeoman’s duty as the bow lookout on our fly fishing expeditions to central British Columbia. We recognized these duties would soon fall to another.

Despite the gloomy prognosis for the hunt, we put out the decoys with the usual care and settled in the blind to wait. The few flocks that came by were high and wide and arrogantly uninterested in our set-up. Finally a mallard, which may have been the last uneducated mallard in lower British Columbia, approached within range. Rob and I both opened fire.

Sedge saw the duck fall dead into the water and hobbled out as fast as his 13 year old arthritic legs and cancer-afflicted hips would take him. He mouthed that mallard and headed back but it soon became obvious he wouldn’t make it. He stopped and stared at the blind. Immediately, Rob waded out and picked up Sedge who refused to release the mallard. As he made his way back to the blind with that dog in his arms, tears filled my eyes. And I cursed myself for leaving my camera at home.

The next day I contacted Mark Cudney, an outdoor artist and writer acquaintance whose skills in both fields have greatly impressed me. I sent Mark some photos of Rob and Sedge and he went to work on some preliminary sketches. The final acrylic painting entitled “Sedge’s Last Retrieve” perfectly captures that poignant moment.

Sedge died two months aferwards and as a loyal companion of shared adventures and affections, he is sorely missed.

Mark Cudney and I never met face-to-face until the painting had been completed. He is the cousin of Jim Cudney, my college roommate for three years, who a couple of years ago sent me a print of one of Mark’s paintings as a Christmas gift. Mark and I then began an email relationship fueled by our mutual love for fly-fishing, the outdoors in general and writing. Mark, of course, is a professional writer and artist and has had a number of his works published, especially in the high end “Gray’s Sporting Journal” and “Sporting Classics” among others. He also has published a book. IOW, he’s a damn good writer and was kind enough to read some of my stumbling efforts and offer helpful suggestions. His art that has appeared on the covers of the above magazines impresses also. You can check that out at www.markcudney.com/. This is where you go to order a print.

When I contacted Mark about doing a painting of Rob carrying Sedge back to the blind I had absolutely no clue how much work was involved in doing a painting like this. So, I asked him how much money he wanted for the job. Understand that all our contact took place through email. Until we met last August when I went back to Buffalo for my 50th high school reunion, we never even had a telephone conversation. Mark suggested a trade for his services…. He would like a new fly rod and reel in exchange doing the painting. Now unless you’re talking about a hand made split bamboo rod or an antique, the best rods out there go for around $700 or $800. A decent reel is another 150 bucks, maybe. Sounded OK to me.

As the weeks dragged into months while Mark was working away on the painting, I started to do a little math in my head and figured that Mark would be making something like ten cents an hour on this gig. I emailed him and said, “Are you sure about this deal? Would you like to renegotiate?” He came back and said that, no, he was happy with the original arrangement and that he had “his own reasons” for taking the job. He also advised me that when he was working as a commercial artist, a project like this would go for about $14,000. Gulp. I figured he’d need to sell a lot of prints to get even a modest return on his investment of time. 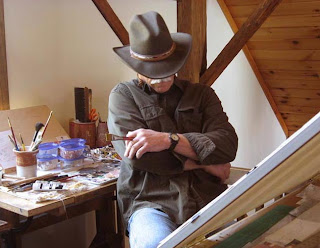 Mark drove up to meet me when we were staying at my former roomie’s house outside of Buffalo during the reunion visit. I suggested we go fly rod shopping to get the payment part of our deal completed. We trooped off to several fly shops in Buffalo to test-drive some high-end fly rods. Nothing impressed him on that day and he later decided on a Winston (Boron, 9ft in 4 wt) and a nice Ross reel.

When the painting arrived in Vancouver (in packaging that would have survived an air drop from 5000 feet) I got it framed and headed for Whistler where Rob had been waiting anxiously. It so happened that all his relatives were in town for a family reunion and that suggested an “unveiling party” would be most appropriate. A little champagne, some appies and a damp eyed unveiling marked the occasion.

Sedge’s Last Retrieve now hangs in the entry to our house, displacing a very nice Crosby watercolor. (Note: Rob has Print #1 and I have promised him that when I take the big dirt nap, the original will be his. I added the caveat that if I should drown on one of our fishing trips as a result of a blow to the back of the head with a canoe paddle that the deal is off.) 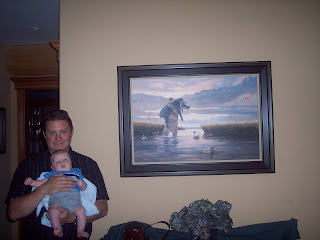 This fall when Rob and I were sitting in a duck blind waiting for some ducks to show up, we started talking up our return trip to Minnie Lake in central BC in early June. We agreed that it would really great if Mark could join us at the yurt on Minnie. It will be his first visit to the Pacific NW. Mark has spent his whole life fishing the small streams and rivers in western New York and reports that the biggest trout he’d ever caught on a fly was an 18” brown. Nice fish indeed for those waters but, we both thought he needed to hook into one of Minnie’s 8 pound rainbows and turn that new 4 wt of his into a knot. Mark agrees and will be joining my friend John Alexander from Seattle, Rob and me on the 1st of June. Sedge’s replacement, Hurley, will be along in his official role as the new bow lookout. 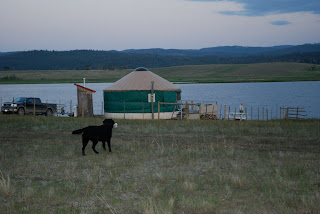 One Response to Sedge’s Last Retrieve