I was never very fond of horses. My uncle had a couple of workhorses on the farm where I spent a lot of time in my youth.

They were huge, especially for a kid, and ill tempered. I suppose if you had at pull wagon loads of manure and hay around all day you too would have reason to be a little grumpy.

My dislike for the horses started when one of them walked into his stall while I was sitting with my back to him on the outer edge of his manger. He reached over, clamped his huge teeth into the cubby right cheek of my ass and hoisted me into the air. He then dropped me on my face on the barn floor. His partner in the traces was no better. One day he chomped on to my bicep and gave me a nice colorful bruise to remind me to steer clear of him too.

My cousin had a “riding horse”, really a broken down nag that we occasionally tried to ride. Getting the horse to go away from the barn was nearly impossible but once aimed in the direction of the barn, she turned into Seabiscuit. Next stop? The stall. And be sure to keep your head down or lose it going through the barn door at top speed. 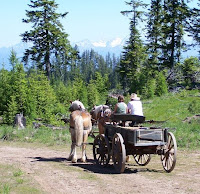 One of my jobs consisted of hooking up this tired steed to a small wagon and taking the milk cans out to the main road, about one mile distant. Although the horse surely considered herself retired, she did not seem to mind these early morning plods down the muddy track to the main road and back. She knew the drill and did not require much guidance from me. 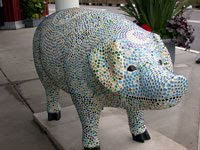 Although I tried with little success to ride my uncle’s heifers my main goal in life at that time was to get a ride on Cy the pig. Cy lived in a large enclosure filled with bushes, small trees and tall grass. My strategy: to sneak into the enclosure and lie in wait for Cy to stroll past. Cy tipped the scales at about the same weight as the average NFL nose tackle and his back stood taller than my waist. 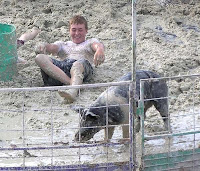 While Cy, like most pigs, possessed keen intelligence, he had poor eyesight. I had discovered that if I surprised him and got started scratching his back, he would stand still long enough for me to swing up on his back. I’d grab his ears we would be off on a brief but exhilarating ride. He’d usually quickly wipe me off on one of the bushes or small trees that populated his pen and I doubt that I ever came close to the mandatory 8 seconds that constitutes a competitive bull ride. My Grandma never seemed pleased when I returned to the house covered in dirt and pig crap after a successful ride on Cy. 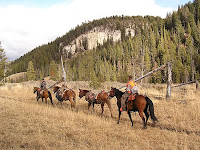 It would be many years before I once again climbed on the back of anything that had four legs instead of a motor. I went on an elk hunting trip in the mountains of Montana and riding horses would be part of the experience. They put me on a gentle and obedient horse and off we went. I figured the horse knew what he was doing so I let him do it. We were on roads, well-maintained trails and open country. My valiant steed simply followed the guide’s horse. No problem.

This trouble free experience lulled me into complacency when some years later I scheduled a moose hunting expedition to Northern BC with my friend Daniel from Paris. This hunt would also require the use of horses. Based on my Montana expedition, I had few worries.

When we arrived I noted that the horses for this trip were considerably larger than the sure-footed ponies we used in MT.
The guide rode a young horse that he had “in training” and Daniel and I drew a couple of beasts supposedly accustomed to dealing with novice riders like us. As we headed off into the forest on that first morning, my first thought was, “You can’t take horses in there. There is no trail.” We forced our way through thick brush and numerous logs, some nearly belly high on the horses, blocked the faint track through the dense pines.

The guide led with Daniel in second place and me riding rear security. When we came to a log the horses would carefully step over. Well, no problem. We came to a two-log combo and the guide’s horse stepped over with no issues. (How they knew what their back legs were doing remained a mystery to me.) Daniel’s horse followed suit. My nag hesitated for a second and then jumped clean over both logs. Since I sat nice and relaxed in the saddle, when he landed my crotch jammed forward against the pommel crushing Mr. Happy and his two fuzzy friends. I gave silent thanks that my procreation days had long since past. But, the pain….!

With my eyes watering we rode on for some miles, the guide stopping periodically to give the long mournful cry of a cow moose in heat. Didn’t work. No bulls came running. 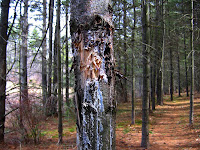 As we started back the guide pointed out a tree where “a grizzly had marked his territory”. Deep gouges raked the tree from the grizzly’s massive claws. Impressive. Earlier we had seen a grizzly track the size of a serving platter in some soft sand. Imagining the size of the critter that made those tracks and gouges convinced me I had no interest in meeting up with him, especially astride a horse and with my rifle securely tucked away in the scabbard.

As we rode on in single file and entered a large clearing the guide’s horse suddenly went nuts, rearing, jumping and bucking. Daniel’s and my horse immediately took off, racing side by side toward the far end of the clearing. It was like the final stretch of the Belmont, except that we were shouting and hauling on the reins to get the horses to stop. I doubt we had much influence but we finally came to the edge of the clearing and the horses stumbled to a nervous halt. As the guide approached with all three horses dancing around and clearly agitated, I asked him, “What the Hell was that about?”

“There’s a grizzly tracking us up on that ridge. The horses got a whiff of him.” He said.
“Oh.” 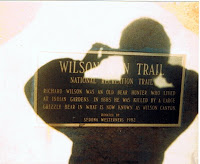 The horses stayed skittish all the way back with their ears twitching this way and that and their eyeballs rolling. Bringing up the rear, my eyeballs were doing a bit of rolling too as I kept a wary eye on our back trail.
Finally we came to a small stream where the horses would have to drop down about 6 feet to the streambed to get across. The guide and Daniel’s horses carefully negotiated the drop. I should have suspected it. My horse never hesitated and just jumped the thing. We landed with a jolt. Unprepared and relaxed I once again jammed my crotch into the pommel and nearly fell off the horse in pain. Two weeks after we returned home I still walked gingerly.
I think the moral of this story is: if you have a choice, take a 4 wheeler… or walk.